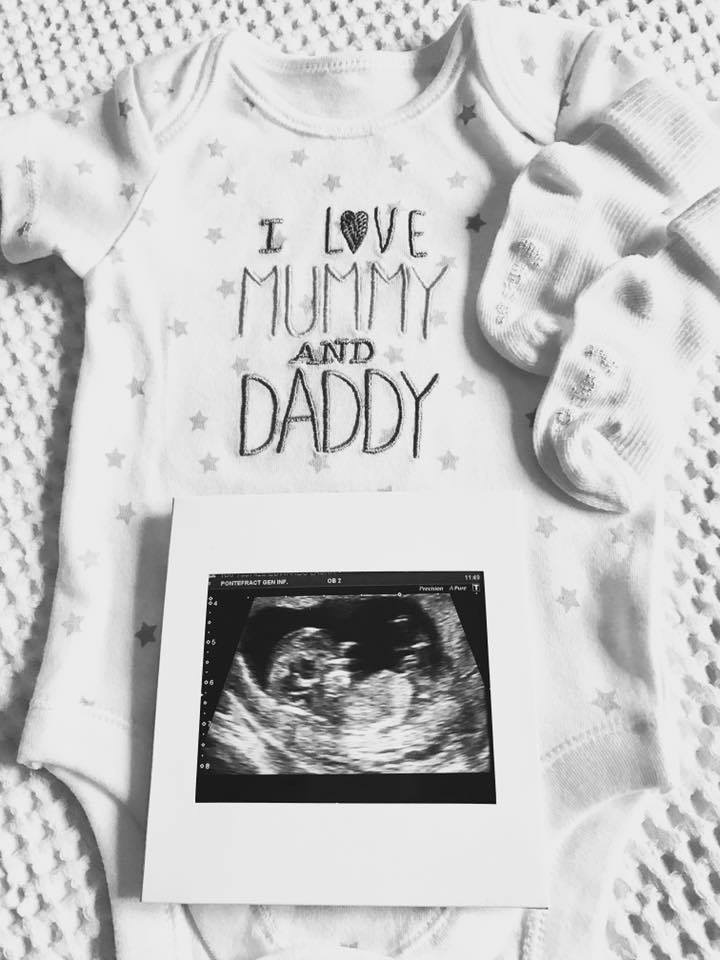 I know that I am incredibly lucky to have been pregnant and so thankful that I got to deliver my perfect little boy into this world. Believe me I know how blessed and lucky I am. There are some amazing people out there that will never experience what I have and that makes my heart ache as they would be the worlds most amazing parents!

I want to tell you my personal experience, from how we found out to my delivery date and every little “bump” along the way. 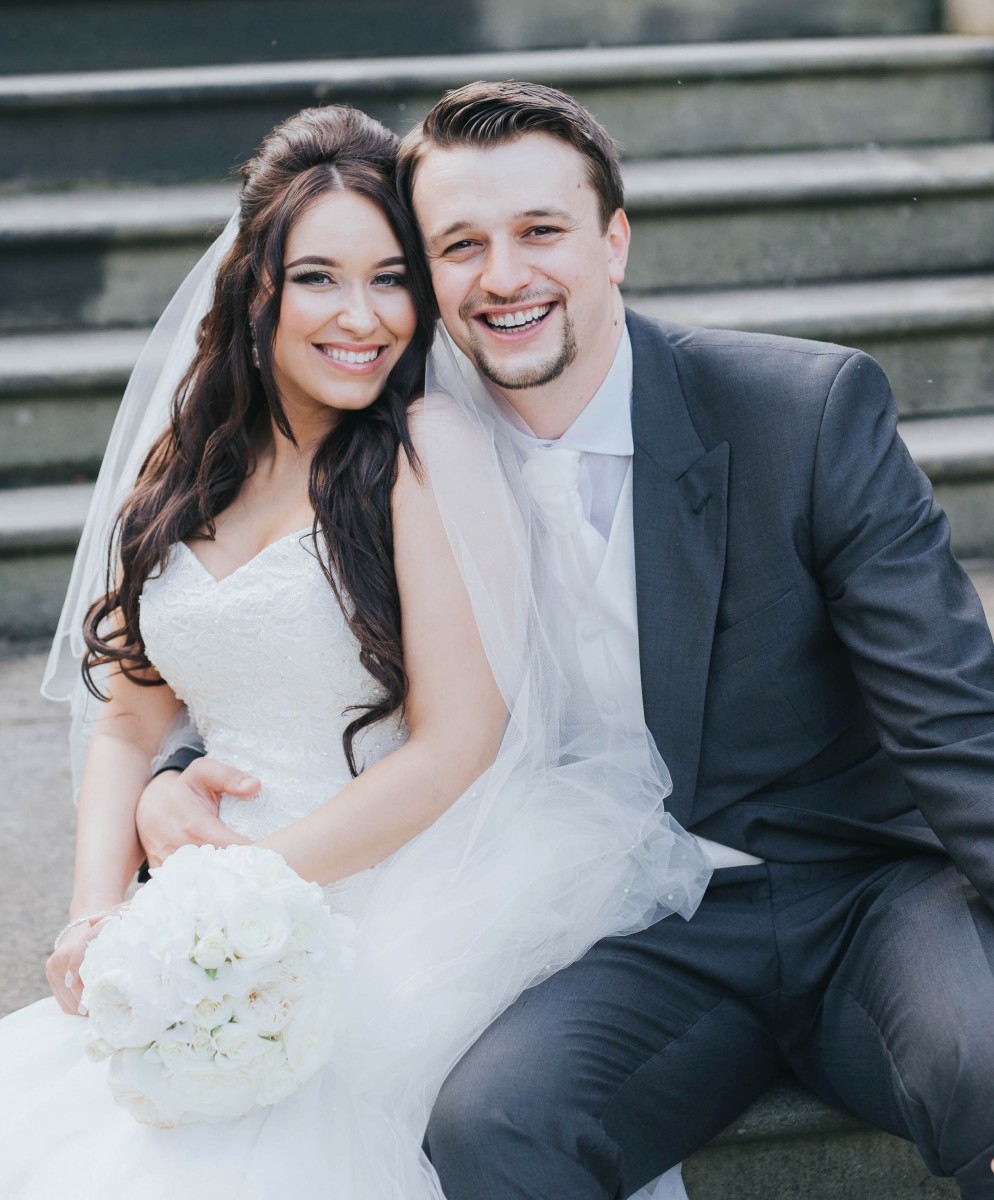 Dan and I got married in July 2016 and had the most perfect wedding day. We have been together now for 15 years and always knew that one day we would get married (even though it took him 11 years to propose!) and we always knew we would like to start a family someday. So on the 1st day of our honeymoon, we sat on the beach and discussed if we both felt ready to start trying for a baby. We both agreed we were and said that whatever happens happens… 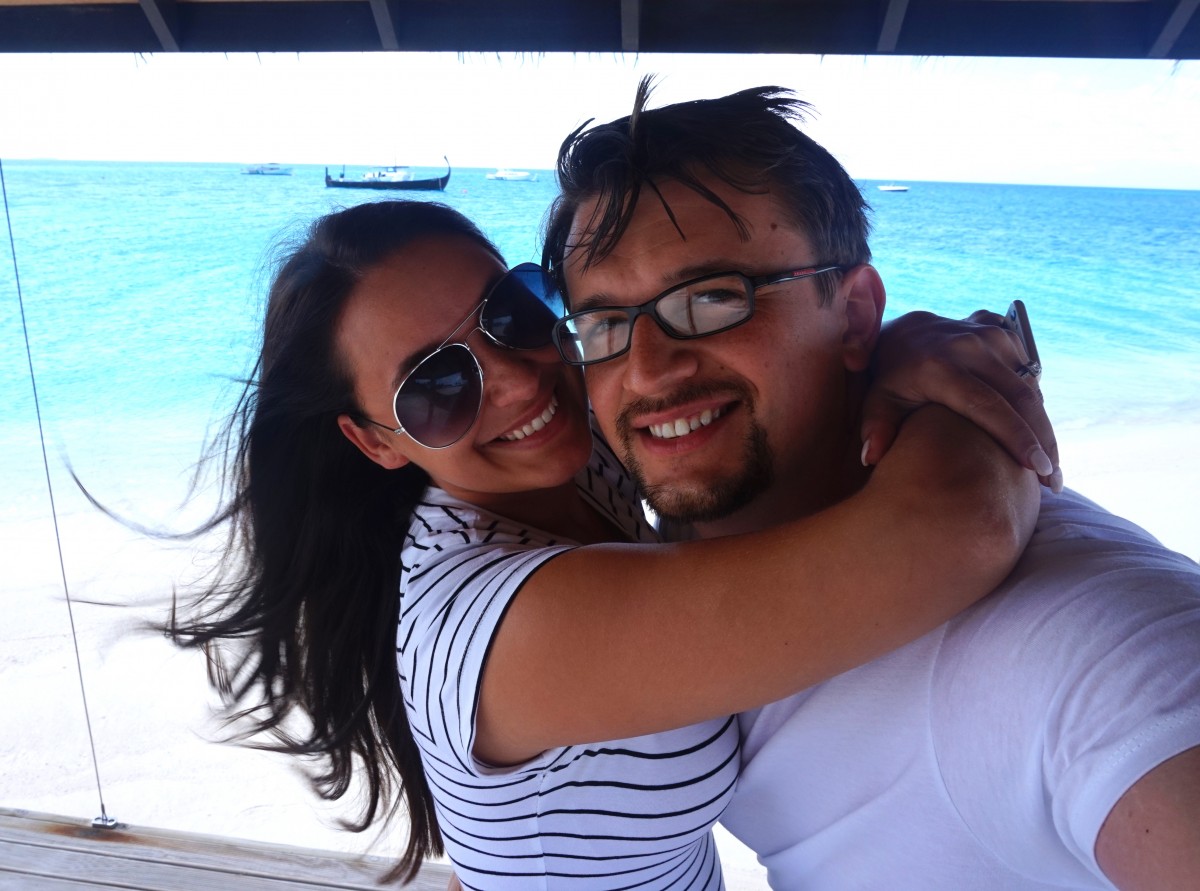 For the last part of our honeymoon we said goodbye to the most beautiful place on this earth, the Maldives and said hello to Dubai. I had been feeling a little different since the beginning of the honeymoon but just put it down to travel. To put my mind at rest though we did a pregnancy test in the Dubai mall. Of course it came back negative as it was too early but I think we both felt a little bit disappointed. Then we flew home and I got food poisoning! I went to the drs and she asked if I was pregnant and as I hadn’t done another test since we got home I assumed I wasn’t. Unfortunately, there’s nothing you can do to treat food poisoning, you’ve just got to wait it out.

A little bit more time passed and I had started to feel a little bit better so I got on with re-decorating the living room. I’d decided on honeymoon that when we got home, everything was changing. So I started stripping the wallpaper and painting the walls, took numerous trips to Ikea and Homesense and actually ended up having a dizzy trip to Dunelm. As we were looking at light fittings I took a funny turn. I just didn’t feel myself, I had to sit down, sip some water and nearly threw up but I put it down to the food poisoning still leaving my system. So another week went by and I had completely forgotten about my period.

One night Dan got home and I was finishing up painting. I really fancied some milky bar buttons so sent him to the shop for me (he’s a good egg!) and then I realised I hadn’t had my period in a while. I actually put the chocolate craving down to my period but I asked him to bring a pregnancy test home just to check. The amount of money I’ve spent on pregnancy tests, just to be sure, even though I knew there was a zero percent chance of me being pregnant is ridiculous!

So when he came back I nipped to the toilet and took the test. After a little while a very faint line appeared in one of the boxes and a bright line in the other… (Just to make you aware that 2 lines meant pregnant) I called for Dan to come and take a look but I thought there was no way I was pregnant. Dan looked at the stick and beamed straight away. It’s positive, theres definitely a line in there no matter how faint. If theres a line, you must be! I just sat there and started to cry. I don’t know why the tears but I’m sure it must have been the hormones! We agreed to sleep on it and I’d do another test in the morning. 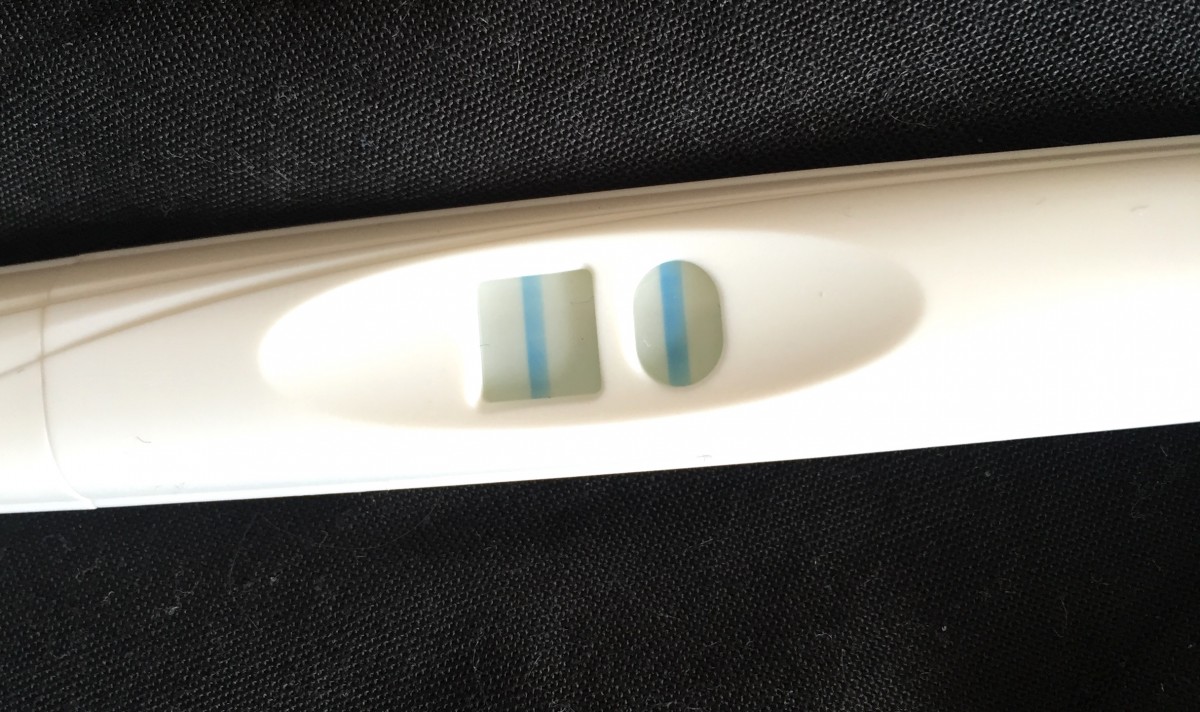 Dan got up late for work the next morning and we didn’t have time to discuss it so I took the 2nd test on my own. There it was, 2 instant, thick blue lines appeared… Pregnant!

I think I said shit about 15 times and then started to cry! Oh my God, I’m pregnant! What do I do? Do I call Dan or call my family? I decided to go into town and buy a Clear Blue test, the one that states how far along you are but before I could do that my auntie popped round. We were chatting but I felt a million miles away. My head was just spinning and I think I just looked vacant. Then she looked at me and said, “Your pregnant aren’t you?!” How the hell she knew I will never know! I just nodded and started to cry. She came straight over and hugged me and I suddenly didn’t feel as alone. Knowing she was so happy for me made me feel so relieved and I just couldn’t stop smiling. After she left I popped into town and bought a test and rushed home to take it… but, I couldn’t pee! I drank so much pop, water, tea and nothing! After what felt like a million years I finally managed it, just, and there it was. I was 2-3 weeks pregnant! 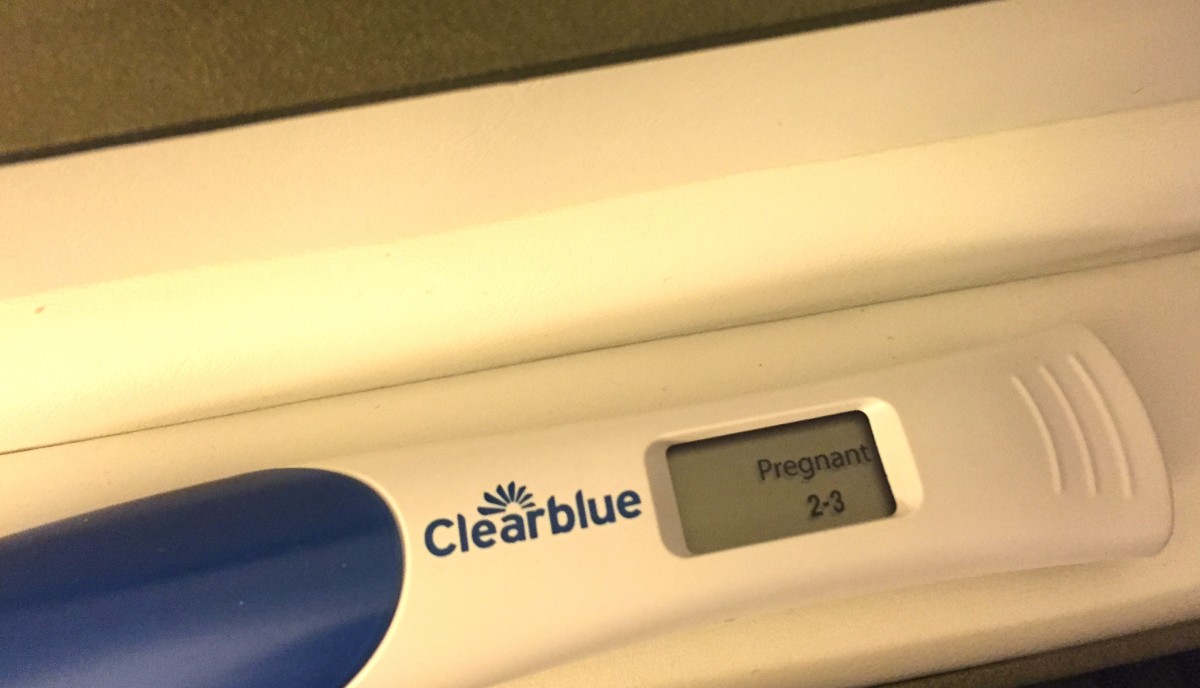 I decided not to tell Dan over the phone, I wanted to do it in person. I was out with friends that afternoon and the discussion of babies came up and I had the test burning a hole in my handbag! I didn’t say anything though as I wanted to tell Dan 1st, well technically second but my auntie guessed so that doesn’t count right?!

I had my Nana and sister round for dinner that night and tried to carry on as normal. Dan came home and asked if I was ok, I said yes I was fine but never mentioned taking the test. After we had dinner I asked him if he would take them home as I was tired. Whilst he was out I lit candles all around the room and set up some pictures from our honeymoon on the sofa, some baby pictures from our wedding day display and I put the Clear Blue test in a bracelet box for him to open.

It felt like it took forever for him to get home. He came in and asked me if I was ok and I told him there was a present on the sofa for him. 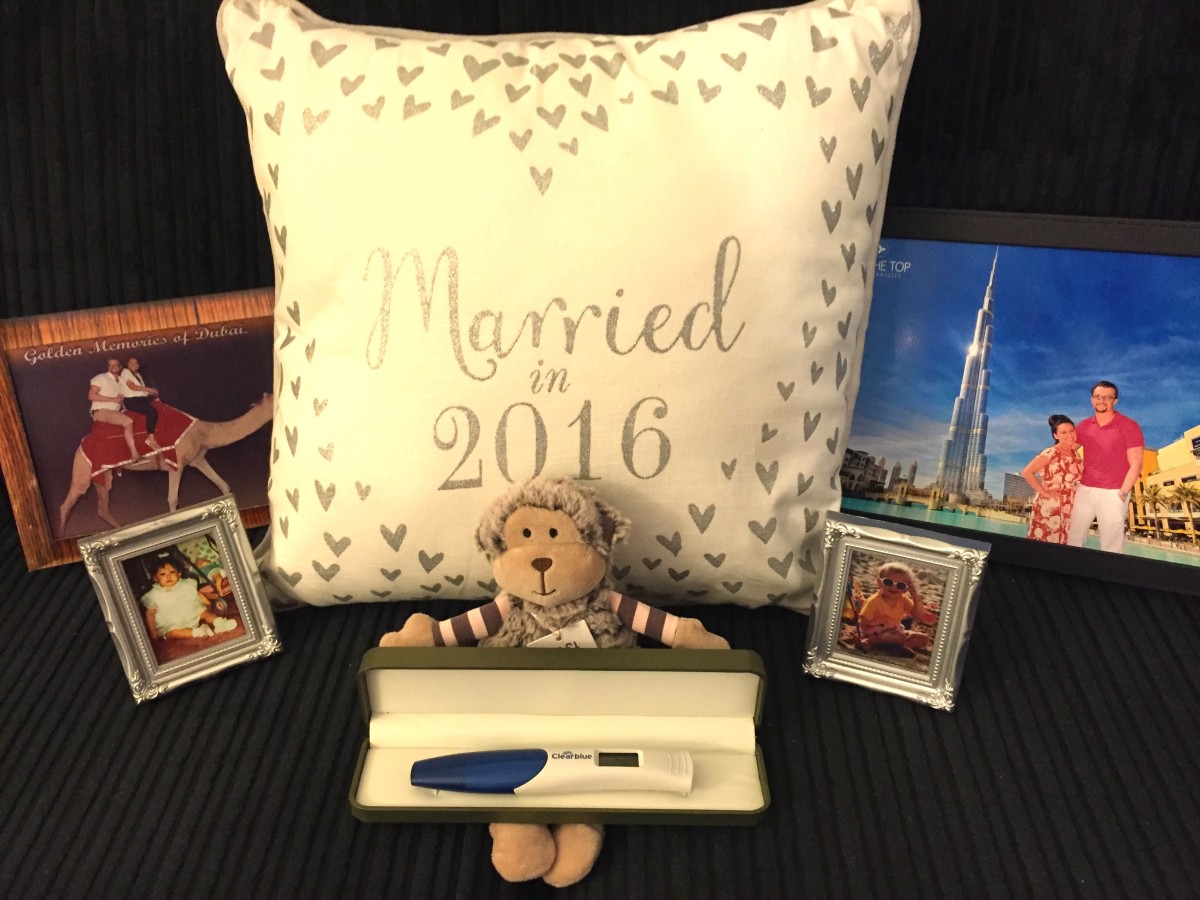 He opened the box and just stared at it. He looked at me and just burst into tears! He kept saying, “really? were having a baby?” Then came the scream and him running around the room like a lunatic, crying and saying he couldn’t believe it! It was such a cute scene to see and made me feel so happy and secure that we both wanted this. Our own little jelly bean.

We then planned a few presents and ways to tell our nearest and dearest about our news and that made it feel even more real.

Nothing can prepare you for pregnancy, from finding out to giving birth. Every step of the way it’s scary, exciting, amazing and at times painful. Your body changes in a way you can’t imagine or really be prepared for but one thing is for sure, no matter what went on in my pregnancy or labour, I wouldn’t change a thing as I have the most beautiful baby boy to be thankful for.

You may also enjoy: